It seems appropriate to give some context to my Madonna fandom before beginning this review. Since I was 14 I’ve liked her sincerely and wholeheartedly with fervor to rival a modern-day One Direction fan. In 2005 I lay on my stomach of our carpeted floor in front of the television and watched her perform Like A Prayer as a part of the Live 8 Concert. This was the first time I’d seen Madonna perform, indeed not the first time I’d heard a song of hers; but the first time I’d taken notice. I felt an excitement, a tingling – at the same time that I wanted to be her I equally had a crush on her. It began here, not the usual trajectory for a Madonna fan that may have grown up with her in the 80s, dancing joltingly to her tracks at clubs – but one nevertheless.

I was alone in this fandom. It was a time when CDs were still a relevant currency and records were not yet cool again. I spent all my money at JB HI FI, a new album each week, Ray of Light to You Can Dance. Confessions on a Dancefloor had just come out, Madonna’s ode to disco - and I was alone in thinking it was brilliant. Friends mocked the pink leotard she wore in the Hung Up film clip saying she was too old to wear such a thing – I fashioned the same costume and wore it to a fancy dress sweet sixteenth.

I ran a Madonna fan site that I set up and coded myself. I would just crowd it with pictures of Madonna sourced from Google images, and quotes that I felt were the most brilliantly inspiring phrases ever to grace mankind. Her pictures populated my bedroom walls, and even as I grew older going through phase after phase, my love lust for Madonna remained constant to this day over a decade later.

Last night, I saw Madonna in concert for the first time. I went alone. Not only was I lacking in anyone to convince to attend alongside me, but it seemed appropriate that my fandom culminate in what I hoped would be a sublime experience, alone alongside 15,000 people.

I arrived right on time and her presence filled the stage just as I took my seat. A rogue grin literally took over my face as I followed her tiny frame with my eyes, making the connection between this woman and the one I’ve thought about sort of existing somewhere up in the sky for over ten years. She was real and in front of me and that reality was intoxicating.

I was unlucky to be seated next to the only three straight men in attendance who delighted in the fact that I had gone to the concert alone. They informed me through chugs of beer that they were here after the football on a bet of which they were the losers. I angled my body towards the man on my other side, mouthing the words with me to Burning Up. He seemed more my speed.

As I further settled into the show, Madonna did also. Or maybe it was the other way around. She was loosely following a format of playing a couple of new songs from Rebel Heart bookended with classics – Vogue, True Blue, Deeper and Deeper. I had given her new album some time when it came out, but not much time. It appeared that those around me hadn’t either. It’s not necessarily a comment on the quality of the album, but perhaps a symptom of having a back catalog of such overarchingly popular pop music equipped with the advantage of nostalgia and retrospect. Those around me would rise for a classic and sit back down for a newer song. I did too.

As the show went on, Madonna’s banter increased. Initially we were greeted only with a larger than life “Hello MelBURN!”, but as she underwent costume change after costume change she would come back out, elaborate entrance after elaborate entrance, talking more and more. It was her banter that I found confusing, and bordering on off-putting. She interacted with dancers, jokingly implying sexual innuendo, talked openly about their bodies, in a very oddly concocted southern accent. She was crass, and I thought I knew that and loved that, but in this context it seemed so insincere and rehearsed, performed only as a crowd pleaser, but it was over-performed and exaggerated to a point of exhaustion at the expense of the audience.

Halfway through, Madonna came out on stage riding a tiny clown bike, talking about how her stage design resembled a penis. She threw nuts out to the audience, offered herself up for marriage, slapped bums, asked us to fuck her, played with prop bananas, referred to the microphone as a dick, suggested jokingly that one of her dancers tried to molest her. People laughed, or cheered, dully. It felt overplayed and tired, bordering on unpleasant. It felt like she was performing as a parody of herself. It made me feel sad.

I did not feel sad because of her age. I have and will continue to vehemently defend Madonna to anyone who suggests she should simply “shut up” and stop making records, or dress modestly, or not talk about sex, just because she’s an older woman. Because of Madonna’s age she is continually told to disappear, and because she won’t, and she adamantly won’t, she is crucified for it.

I used to feel empowered by her sexuality, but last night I think I felt a little saddened by it for a number of reasons. Not because she’s “too old” and equally not because she’s a fit, conventionally attractive woman, but because it seemed to me like she thought that this tired and insincere crass banter was all she had to offer to us. I know that this particular irreverent attitude towards sex was what put her in the radical forefront of popular culture in the 80s and 90s, however in 2016 it doesn’t have the same impact. Most of us are exposed to this level of overt sexuality in day to day life, if not embracing it ourselves. We don’t necessarily need to be subjected to Year 8 level sexual innuendo jokes to get pumped up or enthused for a performance by someone that I myself and 15,000 others consider to be some sort of inspiration or idol-type figure.

The most powerful moments of the show came when she was performing. She is an exceptional dancer, exceptional at strutting and exceptional at holding stage presence. While she was off stage for costume changes, high production value videos played as her dancers performed elaborate choreography – none of which most of us were taking in. I craned my neck for where she would appear next.

I enjoyed her French rendition of La Vie Ein Rose, alone on stage with her microphone and ukulele. She commented on how she loved when people held up their flashlights, as the sparkling lights were “so pretty”. She was right. I enjoyed Like A Virgin, earlier on. Body Shop from Rebel Heart was fun, as was Candy Shop from Hard Candy (2008). My favourite was surprisingly True Blue, a slowed down and pared back rendition again on ukulele. There were moments of lightness, of that joyous, pop optimism and sincerity that I grew to love in Madonna and her music. For these moments I was up dancing, smiling at the drag queen in front of me and obnoxiously elbowing the guy on the post-footy bender bet to my left.

She played for a solid two hours. I felt like she really gave a lot in those two hours because it really appeared she was very obviously and deliberately performing. Exaggeratingly, and for me – frustratingly - playing out this irreverent crassness that played a large role in initially forging her reputation as cutting edge. I know in my heart that the crass faux-southern-accented Madonna from the stage last night is not the Madonna I thought I knew, but I am reminded that maybe to her fans Madonna is a performer before person with roles and characters she has written for herself over a career that’s spanned nearly 40 years. They’re collaged together from parts of her, and maybe it’s been so long that she’s starting to collage these collages, forgetting the original source material or their claim to relevance.

There’s no denying her talents as an entertainer and, while this claim is disputed – as a musician. Her most powerful tool, however, is that almost visible fire inside of her that I immediately loved and recognized, even through my television screen in 2005. Looking past the deliberate bad taste repetitive banter of her show, past her seriously incredible body and athletic ability, past the costume, makeup, hair – is that fire. She can’t obscure it with characters or boring parodies of herself she believes will please her fans. It’s a sparkling glint in the eye, not unlike the sparkling phone flashlights she liked so much last night – except that glint will never fade, and that glint is what plastered that smile on my face when I first set eyes on her last night, it’s conveyed in the lightness of being I felt when she sung the line “Let love shine” in her perfect encore of Holiday. It’s contagious; it’s filled me with my own fire that I now am able to fuel myself. For that I will always be a Madonna fan. 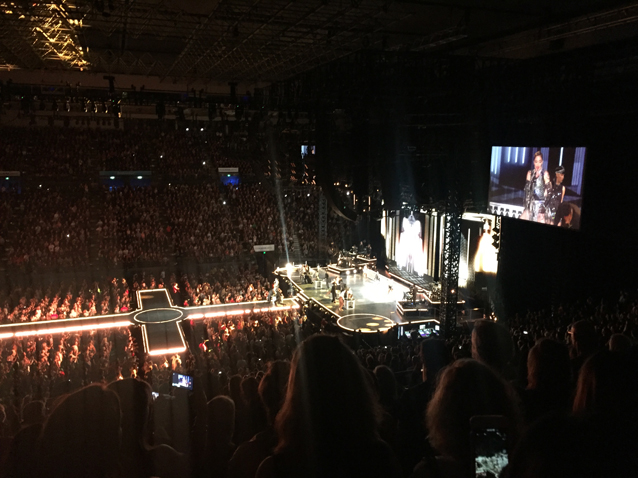 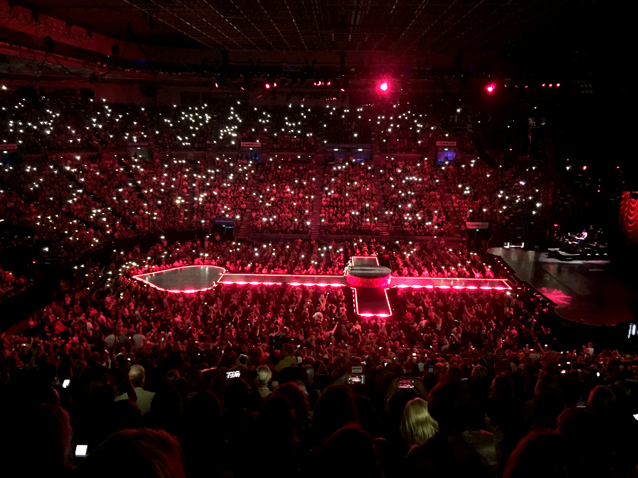 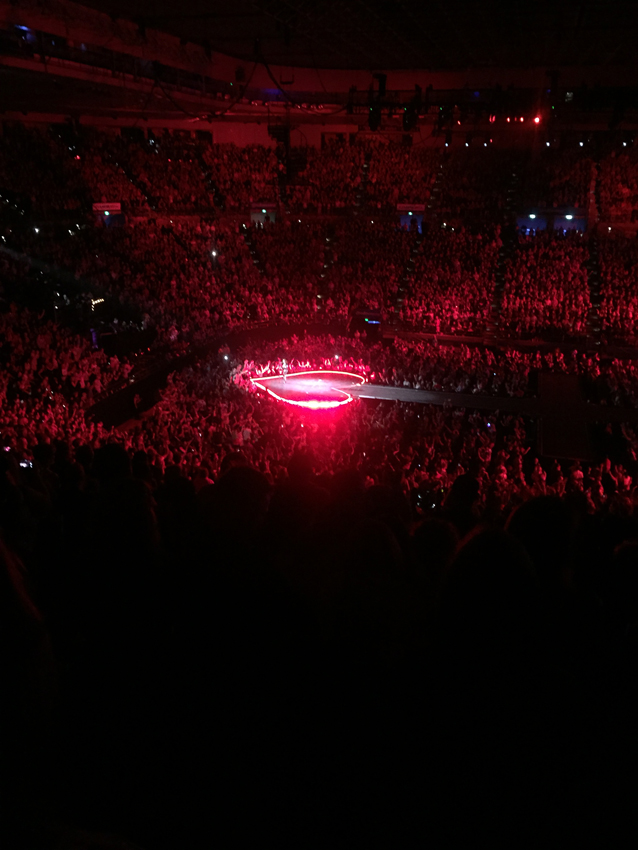 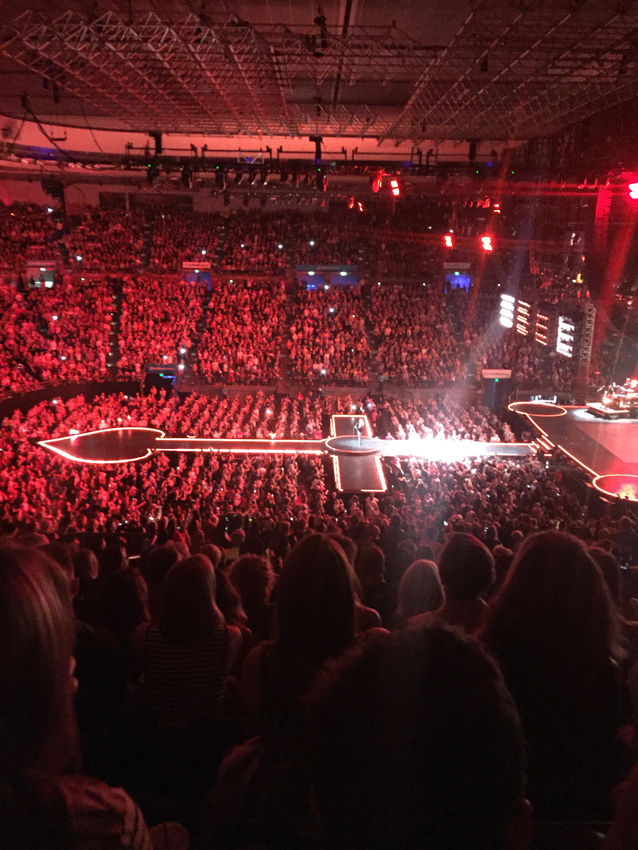