Oh no lol. I've been really sad lately for some reason. I have cried three times this week, once for a reason, two times for no reason. I've come up with a thing that is like supposed to make me feel better, where I say whatever the sad thing is in my life and I say after it "The musical" e.g "I'm Lonely: The Musical" so it's kind of funny, or, "Why hasn't he friend requested me yet: The Musical" What a laugh.

Whenever I say like oh I'm sad I always have to stipulate "BUT I'M OKAY GUYS" because I feel bad for being sad because I hate being worried about and hate being "A BURDEN" you know. I never write about being sad on here because I know my family and friends read it and I don't want them to worry about me but now I've decided it's okay to be sad sometimes and I write about everything else on here so why not that really. I am okay, and yeah I'll be okay or whatever but it totally sucks right now. I'd say I've felt sad for the past like 4 or 5 days? Not even like for whole days or anything, usually for a little bit at one point in a day or something. No one encounter or event brings it on, it just creeps up slowly, and sometimes I'll be listening to Jonathan Richman and feeling really good and then I'll be feeling sad again and I don't know why.

Today on the street I was approached and asked out by two different people. A younger me would have been mildly flattered and maybe a little curious, but the current me couldn't get out of there fast enough. "I'm not really dating at the moment" was the best excuse I could come up with for one dude, the other I used the line "I'm too old for you" and I don't even know if I was, but emotionally I felt like I was and that was good enough. That's the second time in my life that I've used that line, and it's a real line, I used to think it was only in the movies.

The concept of actually like, flagging someone down on the street to ask them out is fascinating. I've been asked out on trains before. I get that a little more because you're sitting for long periods of time in the same space. The street flagger though, I dunno, it's like they act as though I should be flattered, that because of their grandiose statement of introducing themselves to me I should automatically be interested and practically throw my phone number at them. Some people might feel differently, but I find it a really invasive action, putting someone under pressure to talk to someone they don't know literally from a bar of soap and give an immediate yes or no answer about if you're interested.

The thing is, there have been plenty of guys I've seen on the street who I'd love to ask me out, but, it's like, the second they broach that barrier I wouldn't be interested. Does that make sense? I just couldn't spend the rest of my life with a street flagger guy who like, ran in front of me as I was walking and said I look "interesting" or "quirky" or complimented me on my appearance or something. I'd be far more interested in a guy who I walked past and had eye contact with for like one second and never saw again in my life than someone who chases me down on the street for my phone number. That says a lot about my personality.

So, the feeling sad in combination with two guys separate unrelated guys in the space of like an hour, approaching me, wanting to know about my life in a brief little introductory chat while people brush past me, I wasn't really willing to engage with. Plus I really did have a friend to meet and no I don't want company. Their interest in me is based purely on my aesthetic and romantic distance staring spacey looking public self which the image of is quashed as soon as I open my mouth. Little can they tell I'm brutal but at the moment I don't particularly care.

In the past two days I've been to 5 separate exhibition openings. That's a fair amount really. Last night I did it alone, an early appearance at a clothing launch at Kinki Gerlinki, then to the NEW opening at ACCA, then to Paradise Hills, a gallery in Richmond, as my friend Annabelle was in the exhibition there. I walked into 3 separate places alone. I'm getting used to it, but it's not my favourite thing to do.

Today I met up with my friend Georgia and I was really happy to hang out with her. We went to two openings, one was John Nixon's beautiful foray into jewelry making at Gallery Funaki in the city, and the other was Kate Smith and John Meade at Sutton on Brunswick Street. Then we had hot chips and talked about life and love and how we're convinced that we know like, 2 genuinely nice guys each, but we're not cynical don't worry.

I've been really good at being social lately (my like new years resolution goal thing), and I'm proud of myself for that. I haven't withdrawn, which is what I tend to do if I go into lil sad phases or whatever. Ultimately though, being social is healthy for me, but it's not going to solve all problems. Other people can provide good distractions but they can't make everything better you know. I remember talking with Tavi once about relationships and how you don't want to be in a relationship where the other person is a bandaid, like, being with them makes you okay, but when you're not with them, you're not okay. I've never been in a bandaid relationship but I think that in times when I'm vulnerable, the idea is attractive, and can see how other people become part in one.

I'm home now, it's 10.14pm on Saturday night, I'm about to eat a bowl of cereal. Rhiannon by Fleetwood Mac just came on the radio. I feel a little bit better after writing all this. I am so happy to have made this space for myself to speak to whoever wants to listen, I don't even care if it's no one.

When I was at the opening at Paradise Hills last night, I met a girl who I've never met in real life, but was Myspace friends with when I was 16. Since then we've always remained online friends, followed each other to Facebook, Instagram, various different blogs we've kept... meeting her in real life last night was amazing because I was like wow, you know, we're living the life we'd pretend we had on Myspace while we were in high school, it actually came true. She's working as a freelance designer and I'm an artist. It's what we always wanted when we'd upload pictures of our lousy high school art and comment on each others profiles about Andy Warhol or dreams of living in New York or whatever. We're wearing the clothes we'd covet. I caught the tram back from the opening with her and it felt strangely familiar. 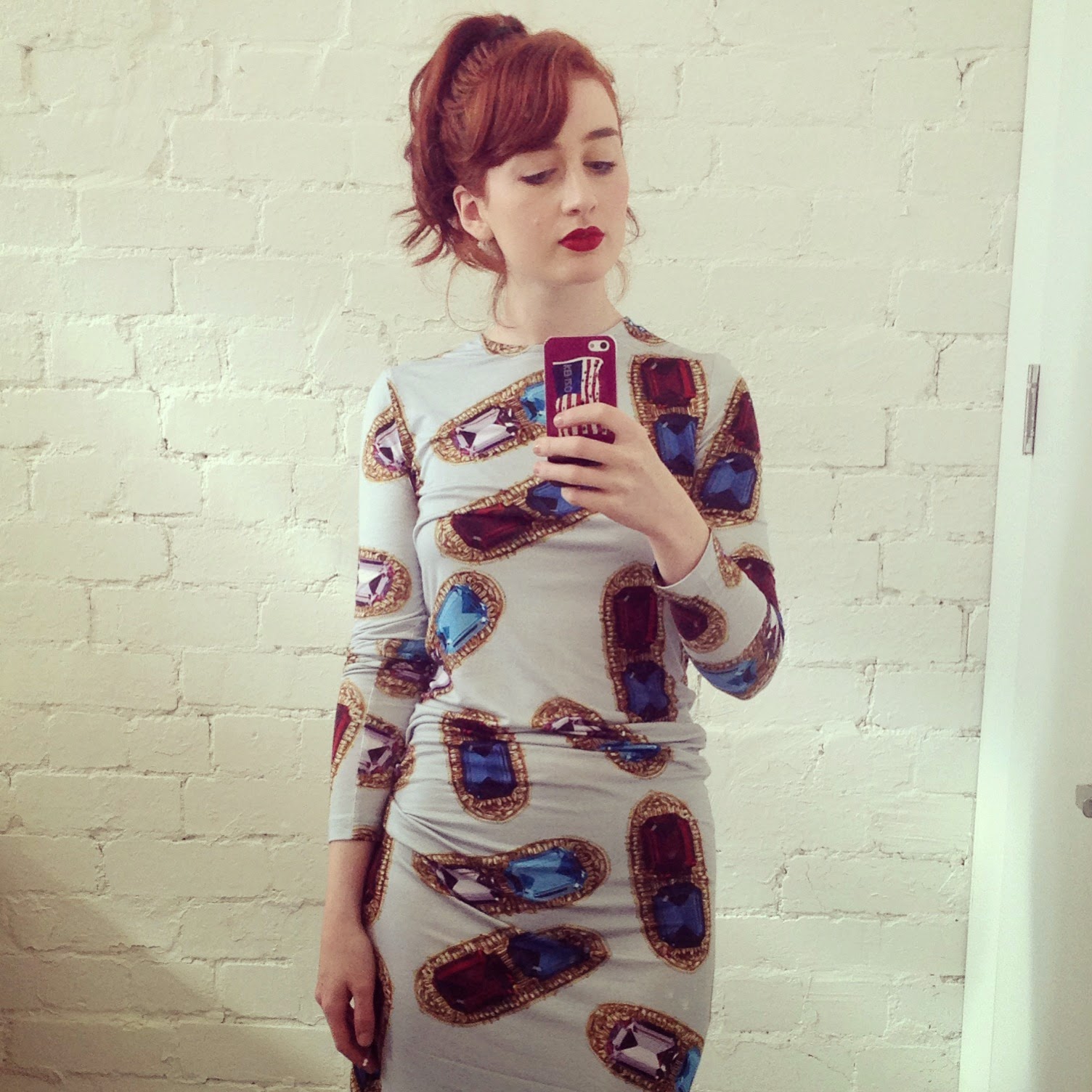