As promised, I said I would upload the article from the National Gallery of Victoria Magazine once the issue (Jan/Feb) was no longer current. It is written by Georgia Jones - a multi-talented friend of mine who is the assistant contemporary curator at the NGV, a writer and smart cookie. The beautiful photographs are by Selina Ou. If you click on it you can see it bigger. 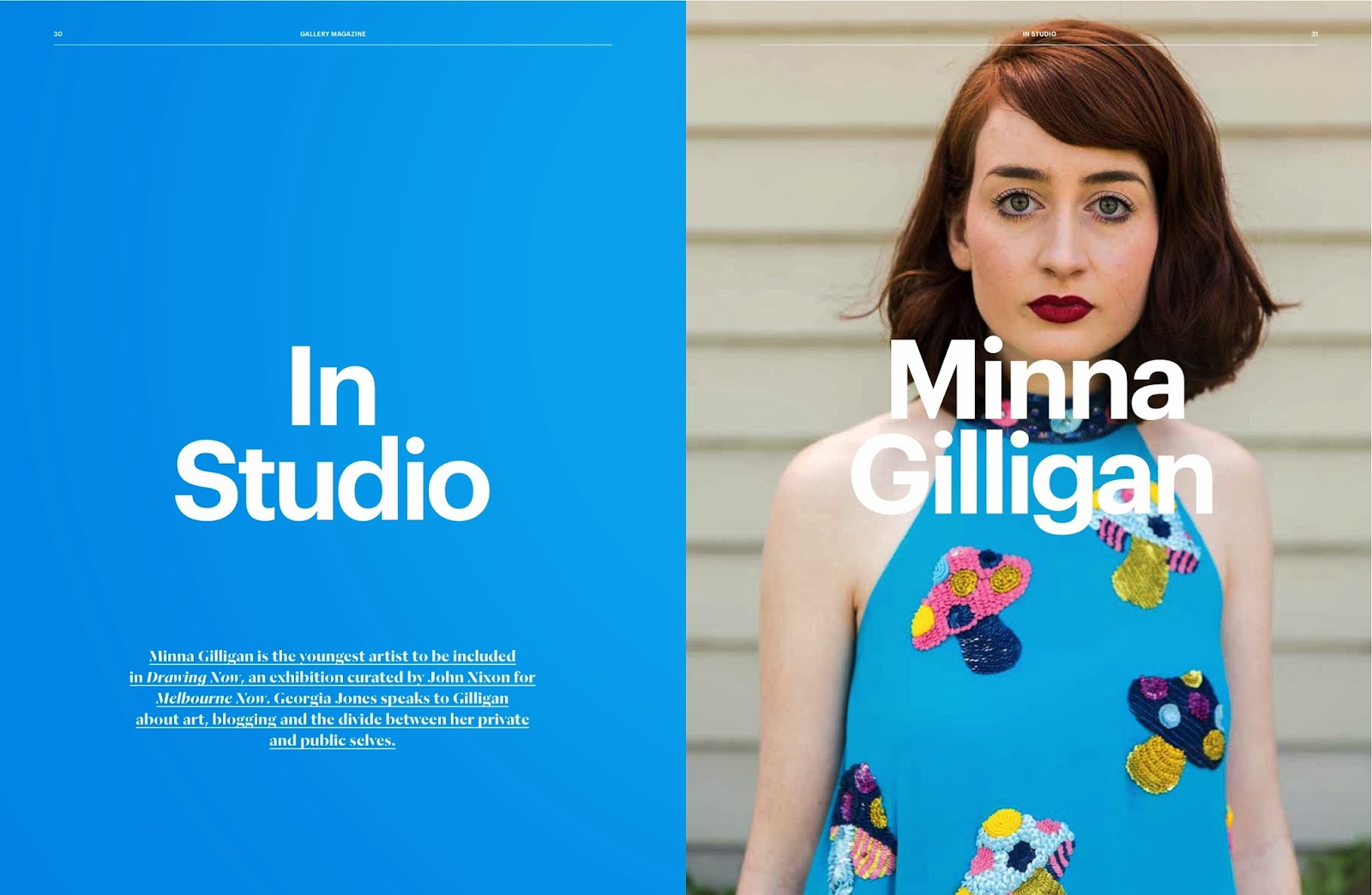 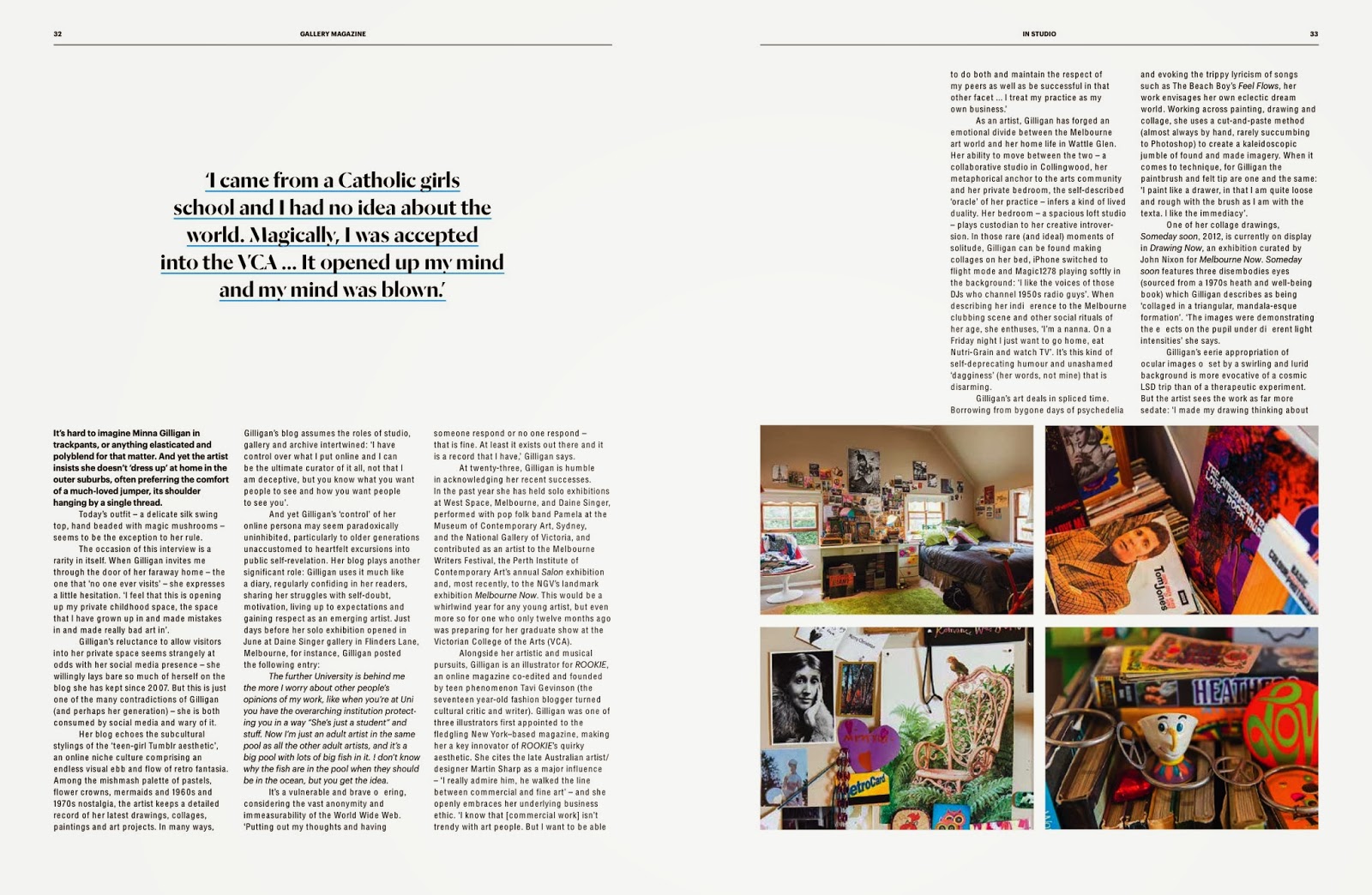 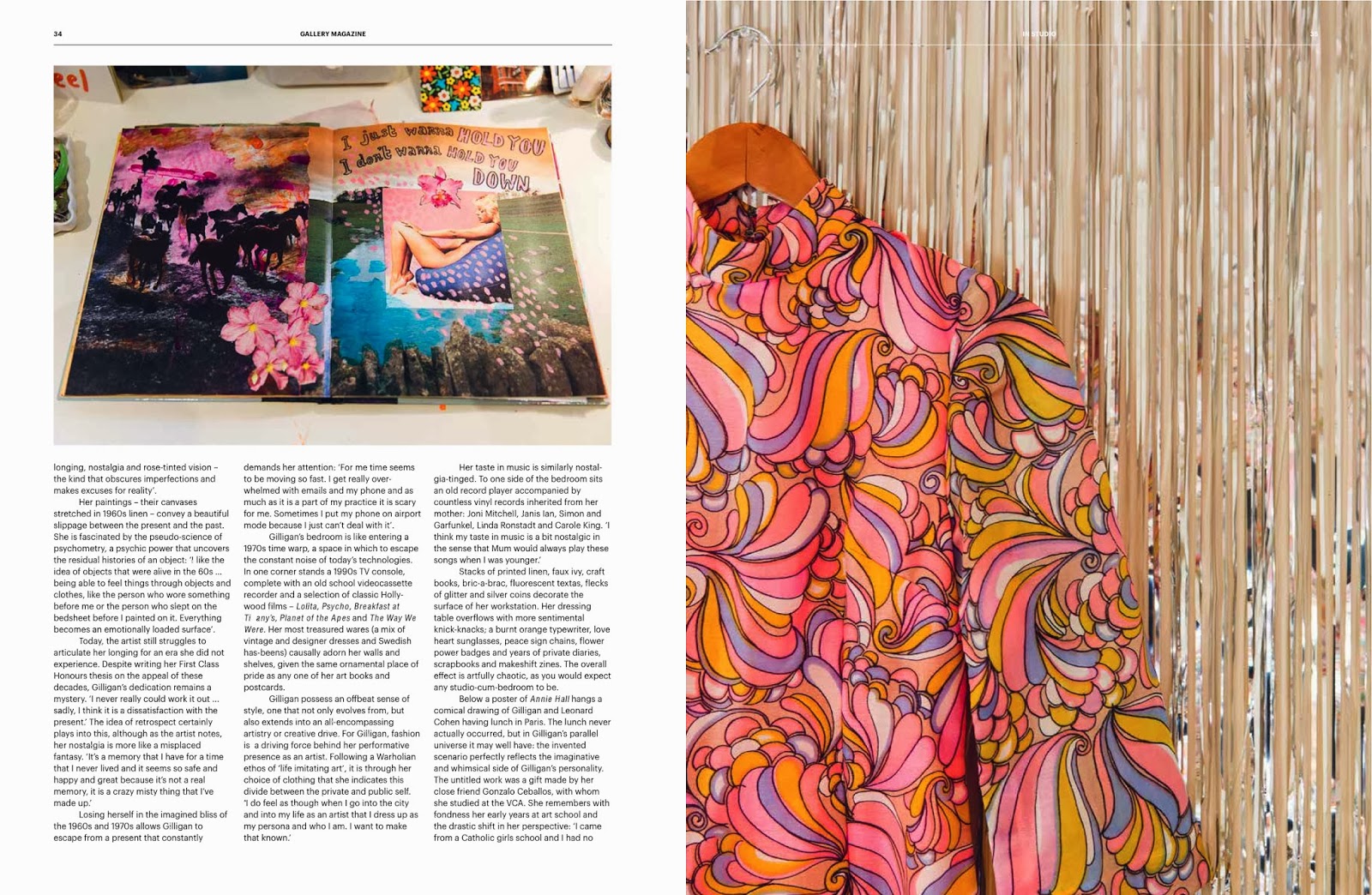 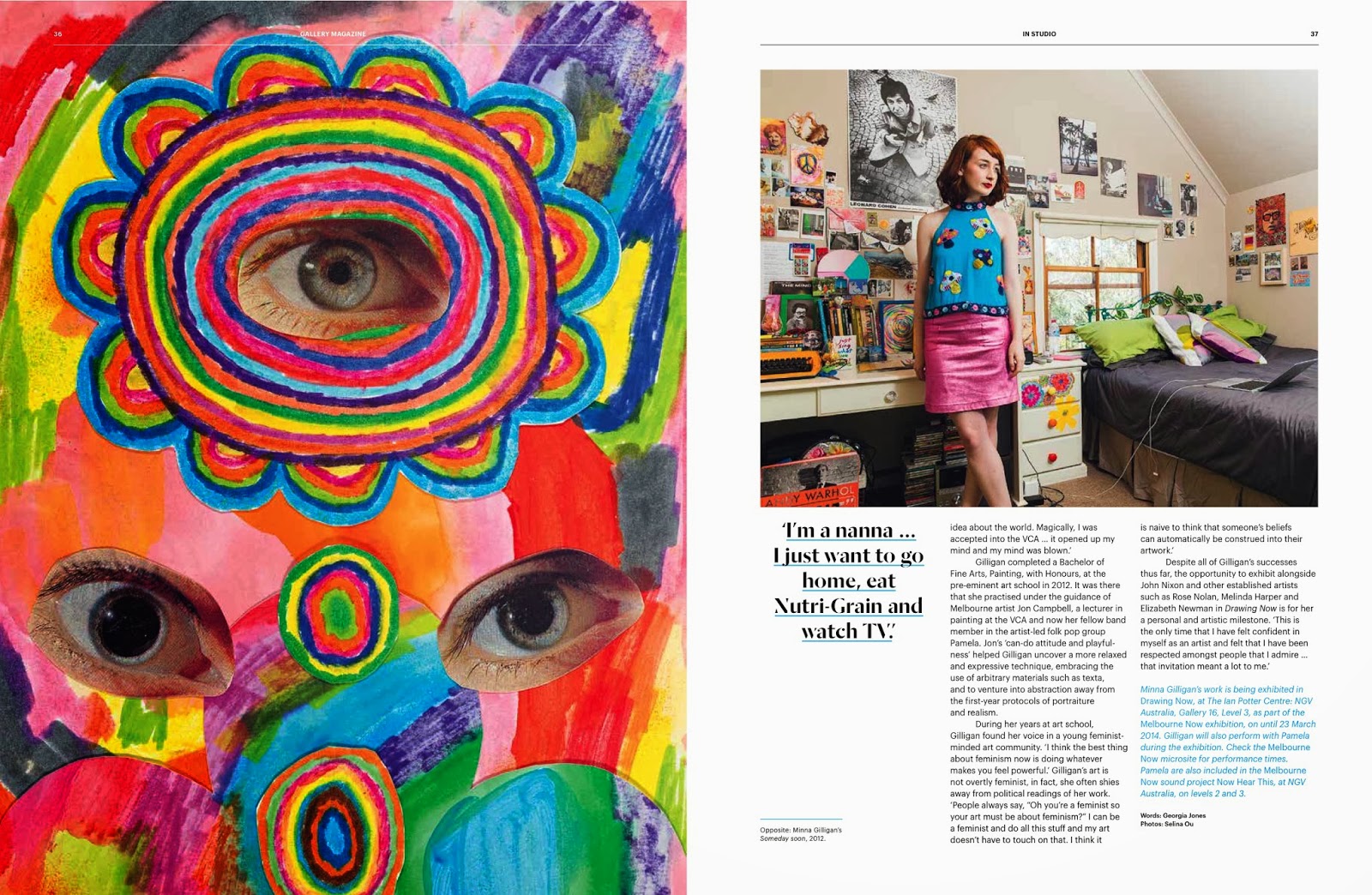 If you aren't sick of me yet, I was also recently interviewed for Vertigo magazine which is a Sydney based publication. Here is a scan of that interview too! 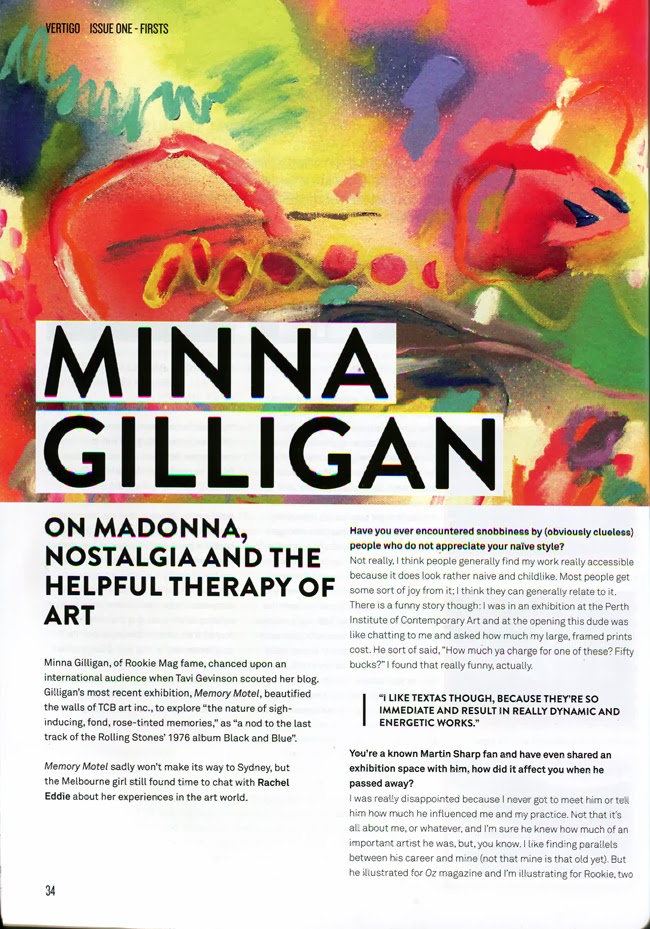 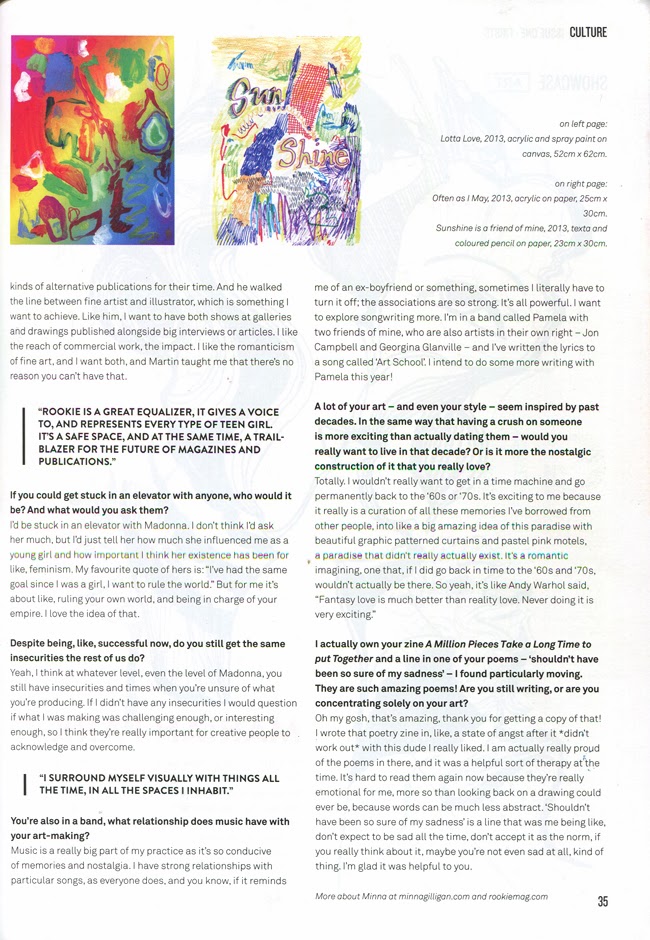 In continuation of my last post about how this year is my second year out of Uni and things are a bit calmer and stuff, I started thinking about 'forever' and how I've really realised that being an artist is a 'forever' thing. I mean, I always knew it was forever, but for some reason the reality of that has only just now sunken in. That's not a bad thing, by the way, but in order to explain it, I suppose last year I used to look at my career as an artist only in the here and now, or, at most, in advance of the next couple of months. If you're a regular reader of my blog you'll know that last year I pretty much worked myself into the ground trying to do as much as possible and go as hard and as fast as I could. Now for my corny analogy - last year I was approaching my career as if it was an 200 metre sprint, but now, I'm looking at it and approaching it as a long distance run. A long, long, forever-type run perhaps with some hurdles thrown in there too.

Seriously though, I'm thinking more about a trajectory, you know, like I literally am only on my first lap, not even, and it's important to have strategies in place for the longevity of your stay, if that makes sense. Basically it's about the 'balance' I was talking about in my last post, going at a steady, consistent pace, while at the same time keeping yourself stimulated with new challenges. I just wanted to convey how I was looking at things now from the beginning, like into the distance of a long, straight road or running track or whatever. The 'artist thing' is a 'forever thing', it's as much about the here and now as it is about 30, 40 or 50 years down the track. Of course there will be periods where I'll be busier than others, but it's just important to remember that there's a thousand other different great things and challenges to look forward to and conquer. That's what I love about being an artist, there is absolutely no possibility that I'll ever get bored if I continue to work consistently and stimulate myself with new problems and goals and don't get locked into one way of doing or making things.

I was talking about this with a friend of mine who also graduated art school recently and he put it as "getting shot out of a cannon" and I think that's how a few of us were working crazily last year. I don't regret it for a second, but I can acknowledge that that kind of momentum is not possible for forever, which is how long I wanna be around.

I've been a bit up and down lately, getting used to things, getting into the swing of things again - I've enjoyed hanging out with Georgie a bit over the past week, we had lunch and some studio time, and then she hosted a dinner with everyone at her place on Friday night. It was nice, and really relaxed. I went to an opening by myself yesterday, I'm getting better at doing things like that by myself, and it's reallllly good for me to do it. I always feel good after I really make an effort to be social regardless if anyone I know is doing the same. I can be good at social situations if I really put my mind to it, ha. And you all probably think I'm ridiculous to talk so much about 'being social' but lately I really have been making an effort and I'm sort of proud of myself maybe. I am so lame but whatever. Also I'll end here because this is spiraling but here is a song I am obsessed with right now.