Am I ever gonna see your face again

I actually have stuff to write about now cause I did stuff over the past two days, go me. One of those things included eating a Cookies and Cream Kit Kat. More on that later. On Monday night I went to see John Waters at Hamer Hall with my friend Brodie, who gave me a *free* ticket, yahoo! As we were walking in I saw this old dude and I just couldn't figure out where I knew him from, then I realized it was Geoffrey Rush! Celeb sighting number one. Brodie thought I was just patting her on the back with congratulations but it was actually me trying to tell her Geoffrey Rush was next to us. Anyway then we collected our tickets from the box office and there was a massive cockroach on the bench, and I tapped Brodie on the shoulder again like I did with Geoffrey Rush and pointed out the cockroach. Upon reflection the cochroach may have been planted by John Waters in keeping with the title of his show 'This Filthy World'. Who knows.

After a kind waiter told us we'd have enough time to have another drink before going in, we didn't, so we had to gulp down a beer and a wine rather quickly before heading in which made me extra giggly when John Waters came out in an amazing Comme des Garçons plaid suit and red shoes. The show was really good, people like him are just seasoned professionals you know. They come out and literally don't miss a beat. It was very funny, moved quickly and left me cringing more then a couple of times, but that was totally okay. I had grand plans of stalking him after the show but by the time it was over I didn't fancy hanging around dingy back doors waiting for him like a creep so left it as it was. The whole night was really fun and I was glad I got to hang out with Brodie.

Last night, the band that I am in - Pamela - was playing at Hell's Kitchen in the city. The vibes were so great. I always enjoy hanging out with Georgie and Jon, having a drink and playing 'Am I Ever Gonna See Your Face Again' as our last song. That in itself is SUCH a great line, and I love belting it out. It's a brilliant song and if I do say so myself, we do a pretty good cover. I'm getting more confident and improving as a *singer* you know, and I find it really fun. So that was good. Georgie and I left together and we chatted like old times which was nice. My journey home was crazy on public transport because they were running buses instead of trains. When you live as far away as I do, this is a serious liability. After sort of verbally abusing a Metro employee a girl approached me and introduced herself, saying she like *recognised* me, and I felt terrible, because whenever I get *recognised* it seems to be in compromising/stressful situations like after giving someone a piece of my mind or running enormously late or tripping over or sweating or.. you get the idea. And I feel like I come across as either a) a total flustered freak or b) a total mean crazy person. I love that people are friendly enough to approach me as readers of my blog or whatever, but I hate when I feel like I come across as they would think I would from what they see online. So yeah, if I've ever met you and you're reading this, sorry if I seem totally insane. I am. I should really make that more public on my blog. Also FYI when I say like that I get *recognised* it sounds like I think I am famous or something which is not the case, it's only because I put myself forward so much as the face of my work, online and everywhere really. I recognise bloggers and stuff all the time but never have the guts to say anything or introduce myself, so I admire people who do and do love it when you do. I just want to live up to your expectations of someone who's capable and normal and smart, ha!

ANYWHO. Today I had werk and it was nice and normal. I was glad to come home and chill out and write this blog post. I mostly find writing really cathartic and satisfying. Tomorrow I get to go to Arts Project Australia for work and I get to pick out some artwork to hang in our office space! So exciting. I really enjoy little activities like that in my job. Yahoo. Here's a bunch of poor quality images for y'all 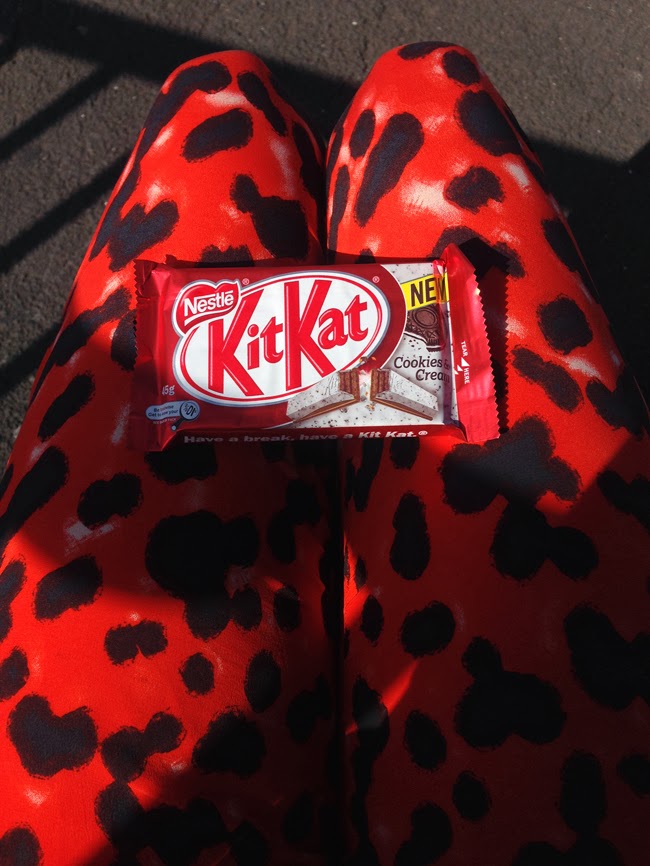 Oh yeah and as promised the main part of this post the Cookies and Cream Kit Kat, I got it after work and was really excited but actually I kind of wish I just got a regular one! It wasn't bad but it wasn't like, brilliant. I should know never to stray from the classics! That's all for now :) thanks for reading X