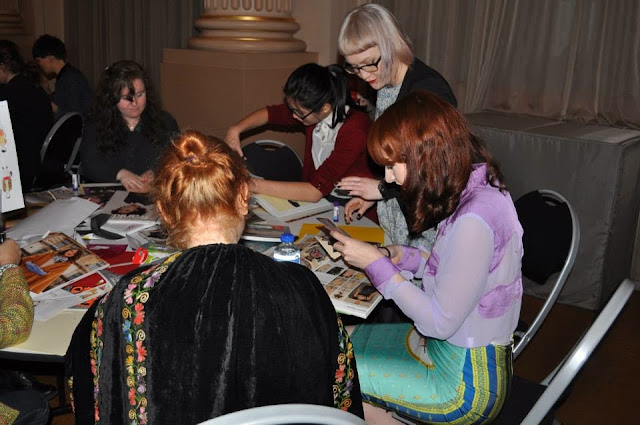 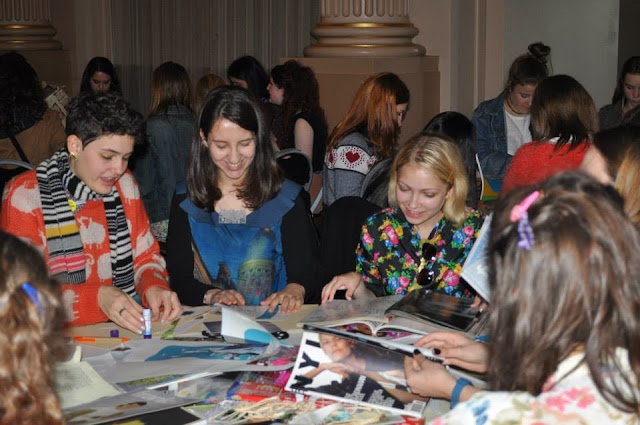 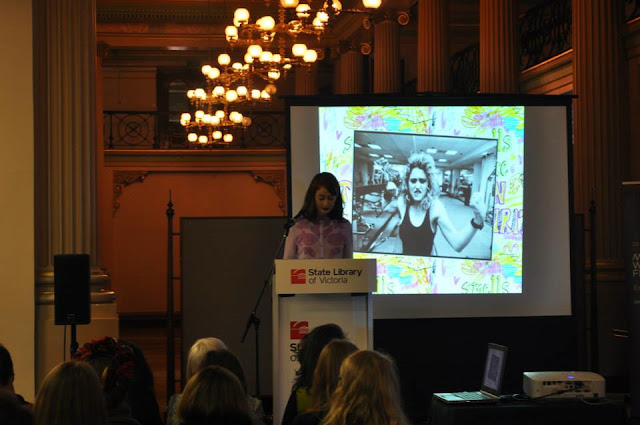 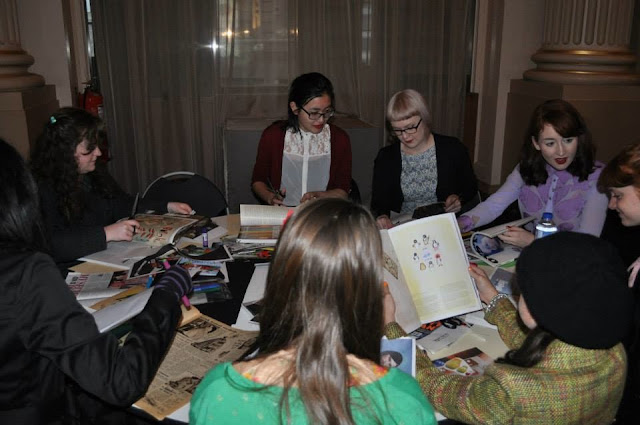 My friend Brodie who is the editor of Filmme Fatales and I, in collaboration with Daine Singer and Jordan Marani, hosted a small private party in Richmond to welcome Tavi to Melbourne. I've never really hosted a party before, and even though I was doing it with 3 other people I still found it quite stressful! Lots of fun was had, though, and there was a serious dance floor going into the wee hours of the morning. I piked pretty early, I guess that's what happens when you're the host - I was exhausted by the time the party even started argh! I think it was a real success and everyone had fun, including Tavi - who'd come straight from being on The Project! I always thought wow if I was tired then Tavi must be 10 times tireder than me. But yeah like it's not a competition. Here are some great super fun pictures from the night, mostly taken by Daine or whoever happened to have the camera at the time really... love to everyone who came along, it was really chill and eventually it even stopped raining! 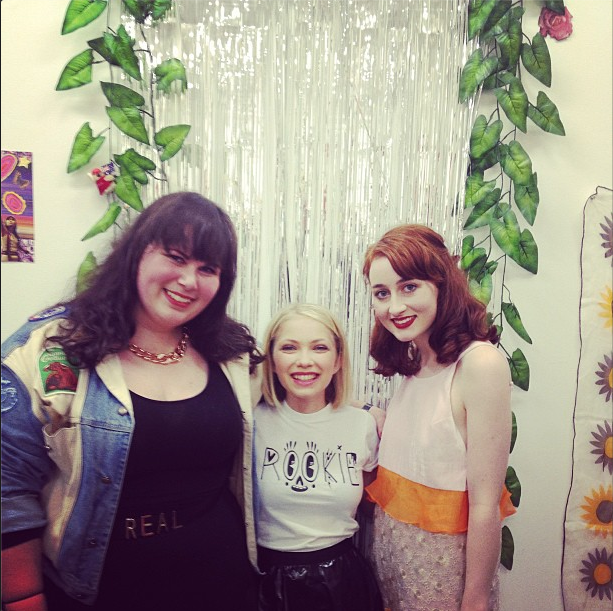 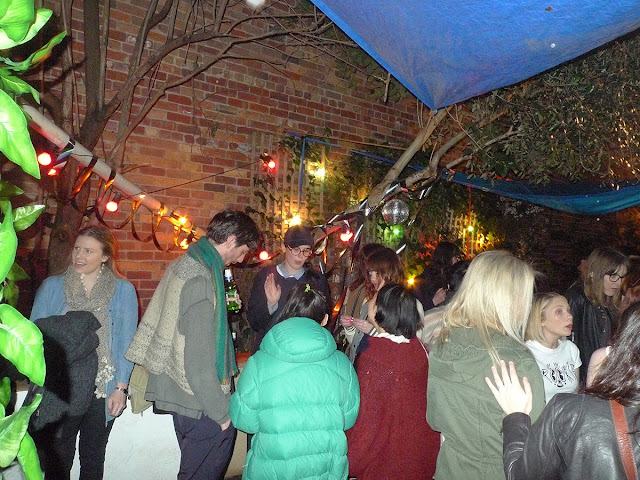 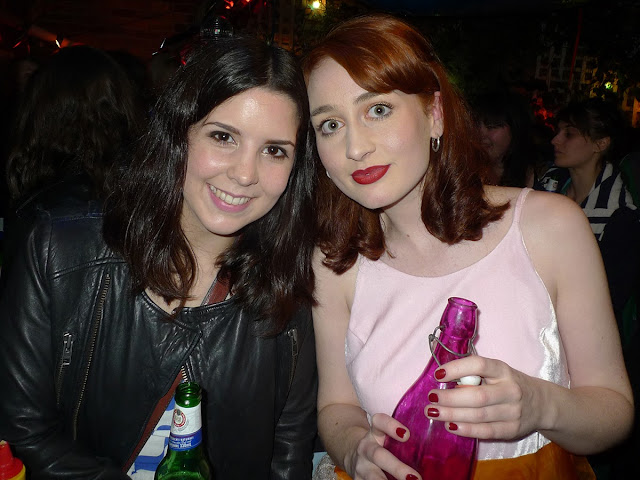 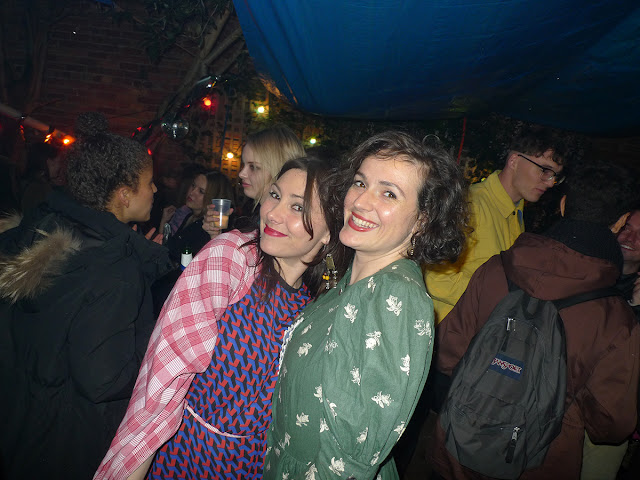 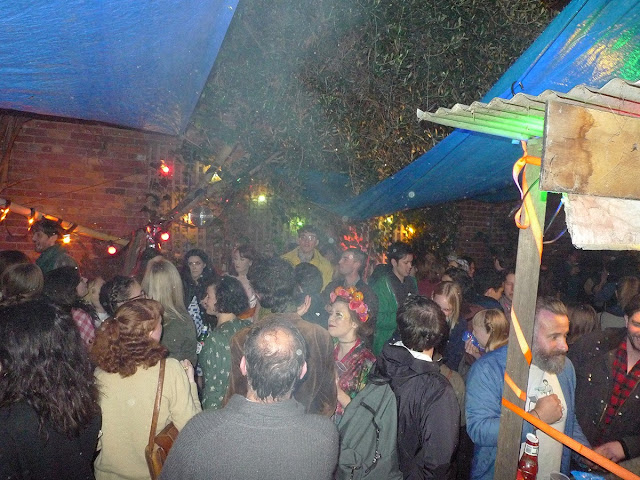 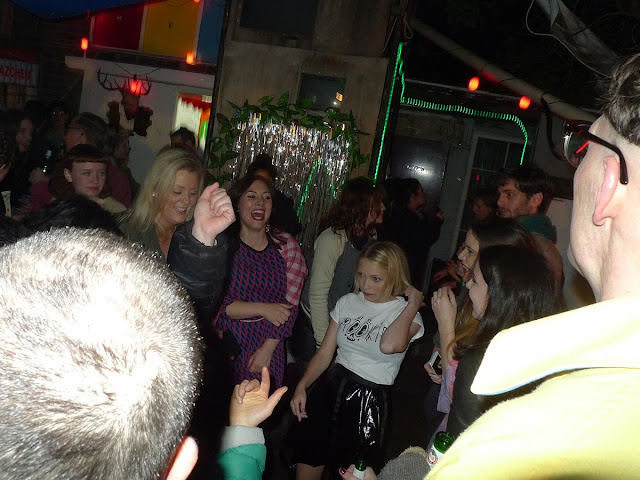 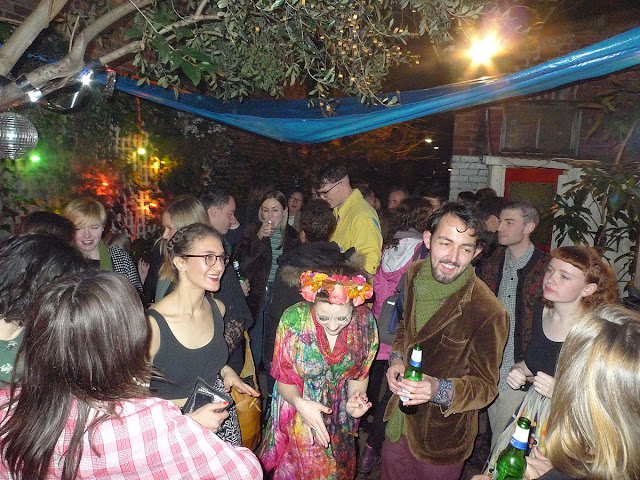 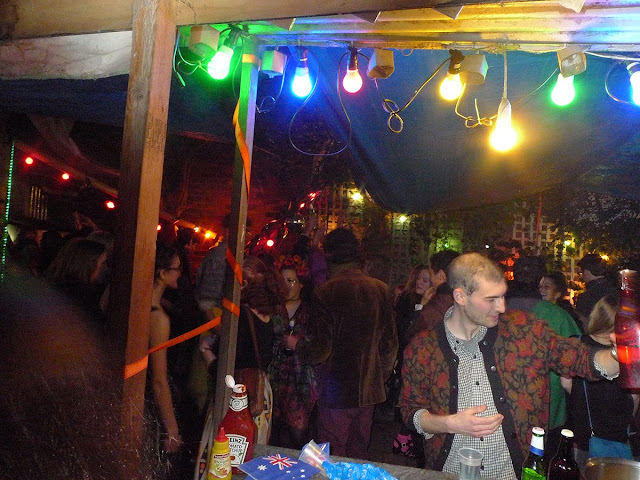 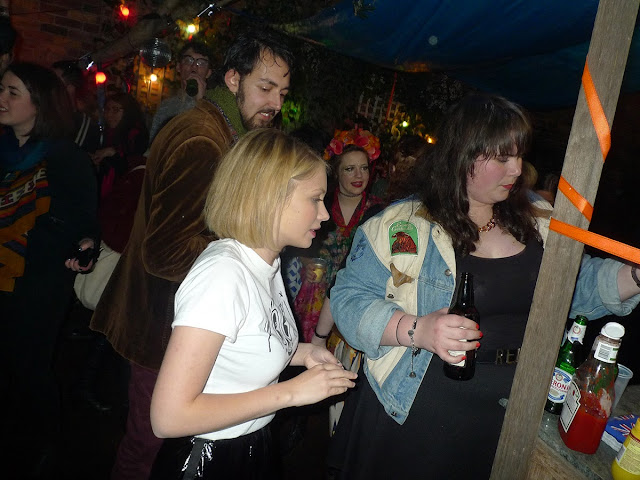 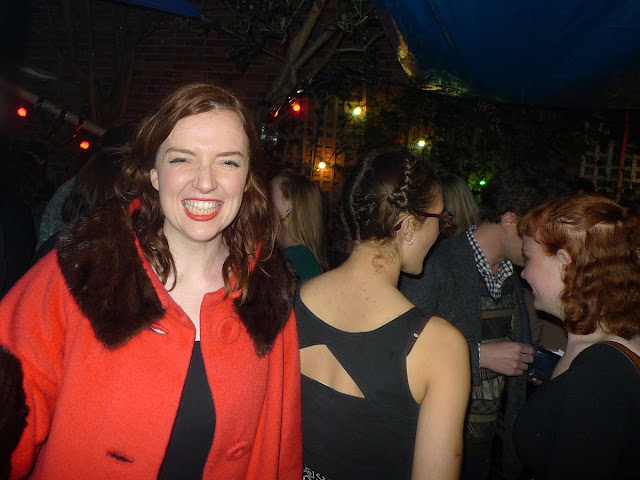 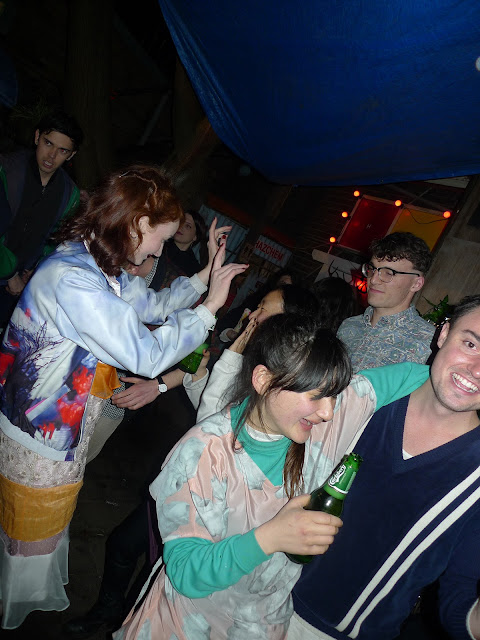 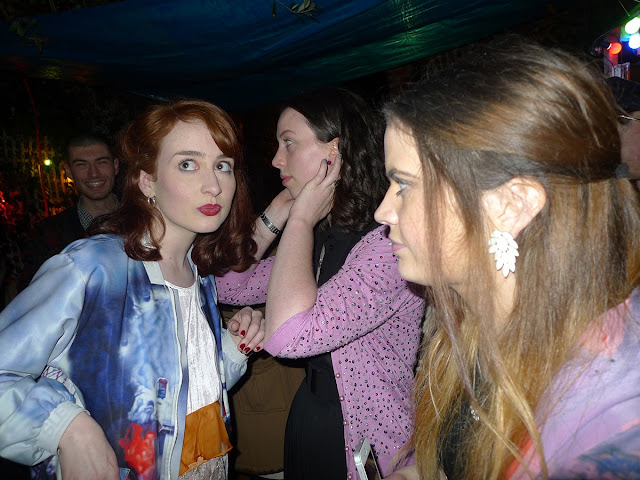 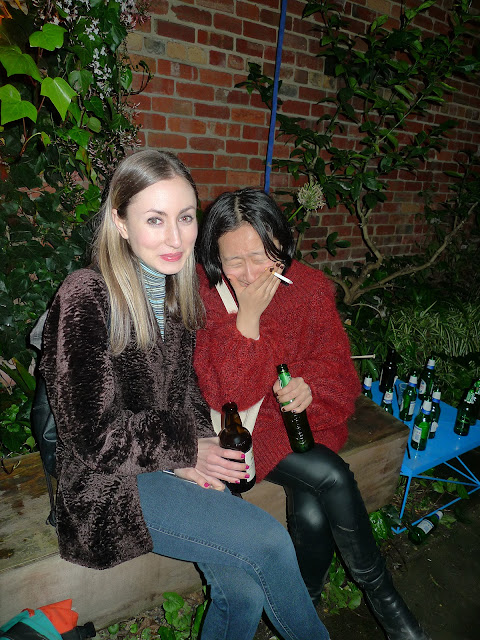 Too many babes at one party in my opinion. Here are a couple of pictures taken by Greta Parry Photography:

Okay so phew. I'm super overwhelmed by the past week. It was HUGE for me. As you probably know I don't spend a lot of time around people. This week I was around people like all the time. Louis says that introverts charge themselves up by being alone and extroverts charge themselves up by being with people. I am an introvert 100%. Not to say I didn't enjoy hanging with everyone, but it just exhausts me! Anyway so like what can I even say here that does justice to the past week! Tavi is an absolute gem and I loved having her in Melbourne. I hung out mostly with Brodie and Tavi doing stuff like shoppin and eating and drinking and also our trip to Hanging Rock. On Tavi's last night we ended up having Nutella Calzones at The Mess Hall on Bourke Street and cheersing to each other a few times more than necessary.

I spoke at Rookie Day, and I think it went pretty well. Apart from the fact that I tend to end up talking really fast because I get kinda nervous, and maybe make an inappropriate number of jokes to distract attention from what I'm actually saying... it was good. My favourite part of the day though was just meeting Rookie readers, and meeting readers of this here humble blog, and meeting people who enjoyed my work. This was really special and thank you to everyone who asked questions, introduced yourself and expressed enthusiasm for my work and what I do. YAY.

I think I'll post a copy of my speech here actually, just for anyone who's interested in reading. It's really conversational and aimed at a younger (Under 20s) audience, but was fun and could be interesting!

"My name is Minna Gilligan and I am an artist based here in Melbourne. I am also part of the staff at Rookie Mag, contributing drawings, collages and the occasional written word. I guess I'm going to talk about being an artist - how it came about for me, and how some of you could perhaps go about it, if you're that way inclined.

As a teen from my bedroom in the bushy outer suburbs, in between riding my horse - I'd daydream. The internet was just gaining momentum in regards to social networks and stuff, and I'd customise my Myspace page with pictures of and quotes by my new found heros - Andy Warhol, Edie Sedgwick and Madonna. I'd just taken a mind-blowing first overseas trip to New York with my Mum and Dad, and came back to the bubble of my bedroom with unfounded fantasies of fame and fortune.

I was definitely not an art prodigy or anything. I did a lot of thinking about art, about drawing, and a lot of thinking about thinking, but not a whole lot of actual physical making. Retrospectively I guess it was like my 'research period' or something, it felt better to just be passive and take it all in before I really started or something. Until then I had never realised how big the world is and as a teenager in a semi-rural all-girls high school I had never felt so small in comparison to it all.

As I got into Year 11 and 12 in high school, I turned my passive awe and wonderment into doing. I started a blog in 2007, as it was the style at the time, and I used it to categorize inspirations, thoughts, - as a means of discovery, of escapism, a time portal. It allowed me to learn about myself and find my voice. I knew what I wanted, which was to be a creative person, an artist, if you will. It was in my blood, it had always been that way, so I had to make it happen. I set my sights on the Victorian College of the Arts. So I started drawing. Terrible drawings, aesthetically, and I was frustrated. Nothing ever accurately translated from my head to paper. I had less than average technical skills. But I had good ideas and good intentions. I would soon learn that these things are the most important.

As a young person one of the many quotes that stuck with me ever since I first heard it, in some interview on Youtube with Madonna in the '80s was her saying something like "I have the same goal I've had since I was a girl. I want to rule the world." That egged me on so hard when I was younger, I mean I didn't want to rule the world in like a dictatorship kind of way of course but in a way that meant that I felt I had total control over what I did with my life. I wanted to rule my own world. I found her brash and unapologetic ambition fascinating, and it really inspired me to make goals and work extremely hard towards achieving them.

I was accepted into the Victorian College of the Arts in 2009. There, my mind was again blown into a million pieces when I started meeting like-minded people, people who wanted the same things as me, people who understood and accepted my crazy obsession with Madonna. During my four years there I studied painting, but was always going home and working on zines and drawings and collages to scan and put on my blog. I sent some of the images to Tavi in 2010 and I was recruited to the 'yet to be named' magazine project she was working on.

Since Rookie magazine launched in September of 2011, I have been maintaining an art practice that largely incorporates painting, drawing and collage. I am a represented artist at Daine Singer Gallery on Flinders Lane and show my paintings regularly in a fine art context. I also work more commercially on illustrations for Rookie, of course, and other companies like Urban Outfitters and Nasty Gal.

So, from where I stand, I think what is most important about being a creative person is courage, whether in the face of adversity or not. As a teen you have those times where you feel sad and you don't know why - or you miss something you can't articulate. It's hard. But what I always had with me was that fire inside that was telling me to think, and make and feel. I always thought that if you want to be an artist it's got to be something that you'd do regardless of everything, like how Frida Kahlo painted in hospital while she was bedridden in a body cast, the musicians that apparently kept playing while the Titanic sunk and Joni Mitchell writing music after she lost her baby. It's not really a choice so much as a necessity. A means of expression as necessary verbal communication is to others.

A few things I've remembered along the way - and I'm only at the beginning of my journey - is that wonderful Skyhooks song 'Ego is not a dirty word', which you might know from your parents reminiscing in the car before you were old enough to tell them to change the radio station - I always think it's important to think that you're not average, and to dream and to believe you're capable of achieving those dreams. There are SO MANY possibilities and sometimes I get sad when people have low expectations of themselves. It's exciting to be young. Anyone can do anything if you believe you can and have the hard work to back it up. Don't be afraid to be a tall poppy or a big fish in a small pond. Put it all out there.

When you're first starting out on your 'creative path', as I mentioned before - it can be hard because sometimes the things that you make aren't as grand and wonderful as they are in your head. It's important to go through this phase and come out the other side. I've always thought you have to make bad art before you can make good art. The good art comes out of the frustration at yourself for making bad art, or that's what I've thought anyway. It takes time. As a teen and in art school and even now I've gone though phases with my art, tried different things, dabbled. Periods of experimentation are so important if you want to continuously challenge and re-invent yourself a-la Madonna.

Ultimately like I'm going to appropriate the Nike slogan and tell you to "Just do it", if you know it's what you want to do. Don't question the financial side of things. Don't listen to your parents on that matter. Work hard and push through mean reds and sad times and boy troubles by making and doing. You'll soon find you've created something that exists outside of yourself, that has an identity all of it's own - and you're in charge. It's exciting and liberating to know that a part of yourself breathes in galleries and exhibitions and magazines and on computer screens all over the world, without your physical being there to support it. Plus there's the parties, the exhibition openings, afternoon naps in the studio and wonderful days like this where I get to talk to a group of engaging and intelligent young women like yourselves."

I just also want to say thanks to my friends and family and other people who were super understanding and supportive this past week while I had so much on. It was really fantastic to know that people were excited for me and looking out for me making sure I wasn't too tired etc etc. I'll finish with this lovely picture that Rookie reader Georgia took of my after Rookie Day. She also gave me a Tim Tam! :D 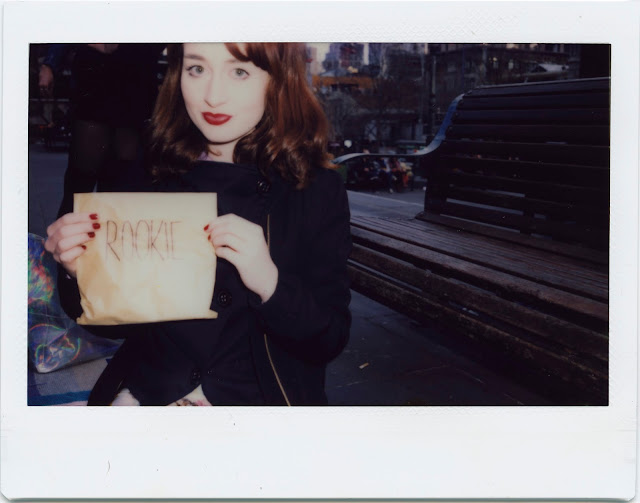