Blowin' in the mind

I am included in an exhibition that opened last night at Damien Minton Gallery in Sydney - called Graceland. This was a particularly special group show for me to be asked to be a part of, because it centered around a new work by one of my absolute most favourite and influential artists, Martin Sharp. I have written about him before here: (http://www.minnagilligan.com/2013/04/if-i-could-turn-you-on.html) before I knew that I myself was going to be in a show alongside him! Squealing!

Anyway the show is called Graceland because all the works are referencing Elvis Presley "The King" in some way. Totally up my alley. This is the work that I made for the show. It was originally a collage but then I scanned it and had it printed super large scale on fabric. 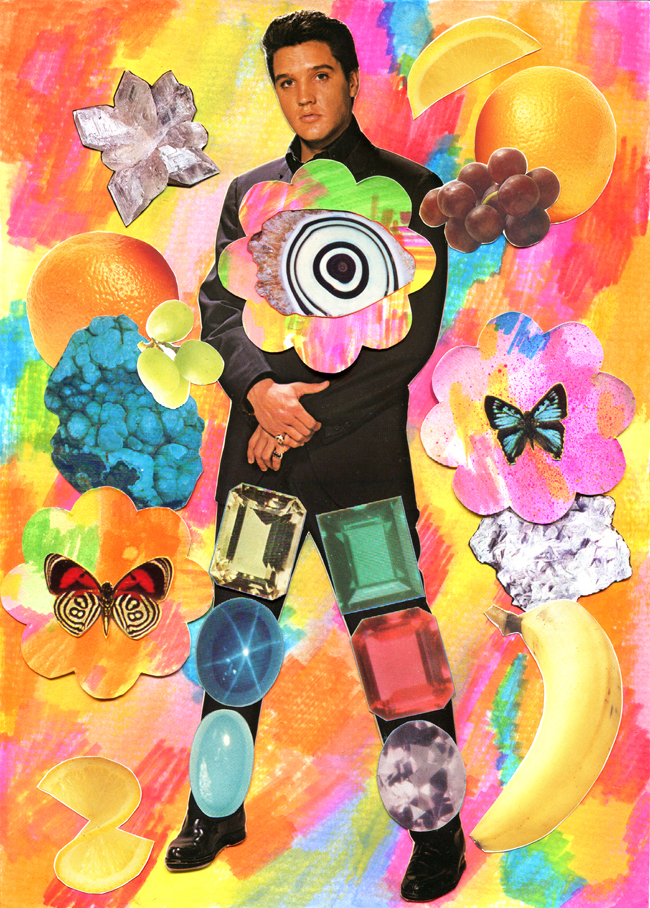 I was nervous, actually, because I knew that Martin Sharp himself would see the work. I have been so heavily influenced by his super '60s, psychedelic, pop imagery that filtered through many-a book on those 'golden years' that I'd get out of the library. He captured that iconic, crazy, drug fueled aesthetic in the best way, and I just love how his images were so heavily ingrained in popular culture, not just in Australia but all around the world. I love the power in that, the reach you can get. It would be great if all artist's work were as widely saturated as advertising is, but they're not, and it takes someone very special and in my opinion smart to make it happen, while still maintaining their practice in the position of 'fine' art. I think that's what Martin has done, and it's remarkable. And that's what I want to do.

His work is floaty, funny, political, relevant and spacey all at once. It's on art gallery walls around the country and also on posters on the bedroom walls of pseudo-teenagers like myself. It graces the cover of some of the most pivotal rock albums of the '60s and '70s - pivotal for their music as much as what they stood for - their image and philosophy that was embodied in Martin Sharp's imagery. He captured so much, personally and universally, of those times.

I really recommend reading this interview with Martin from 2012. http://www.smh.com.au/entertainment/art-and-design/interview-martin-sharp-20120531-1zjo7.html
It's fascinating. Particularly the part about the Bob Dylan poster. I have that poster next to my bed and have always read 'Mister Urine Man' instead of 'Mr. Tambourine Man' as a few of the letters are partly obscured. I loved it because I felt like it was a joke that Martin was playing on people who looked carefully or something, which was hilarious to me. In this interview he said he might not get around to reworking the text so it didn't read Mister Urine Man. I hope he doesn't. He ends the interview with this: ''I never would have thought art would lead me into all these endless realms of thought. But here we are." I love when artists get real about the universe and life n stuff. It's so much more interesting to me than some quote from some book by some theorist I haven't but should probably have read. I love it when stuff gets emotional and even corny. It's the spirit of the '60s in me probably most likely.

Martin is old now, and sick. This will sound terrible but I wish I had of gone up to Sydney to for the opening, because it probably will be my first and last chance to ever meet him. I couldn't have been more honoured to be in a show with him though, and all I would ever want is for him to know he inspired me, which maybe would be communicated without words just by looking at my work. Also I would hope to perhaps continue his legacy in some way - I wanna make some super iconic album cover that gets printed onto posters and put on people's bedroom walls, and I wanna make paintings that hang in galleries too. What of it?