I keep my visions to myself

T-minus two days till the opening. My neck is very tense. I got my outfit the other day, and I am so monumentally excited about it you have no idea. Or maybe if you know me, you have some idea. I spent too much money on it but I don't care because I love clothes and I think it's okay after working really hard on something to treat yourself to something really special. In my case it's usually garments or shoes, and in this particular case also that burger I had the other day. Special outfits for me also mark special events and this one is special. I'm only going to reveal part of my outfit now which is this Verner kimono that I bought. It is the same print as the dress I wore to my last opening at West Space, and I just love the print so much that I couldn't resist this more winter appropriate version of it.

Yesterday I was in The Age newspaper thanks to Dylan Rainforth who wrote about my show and the opening this weekend: 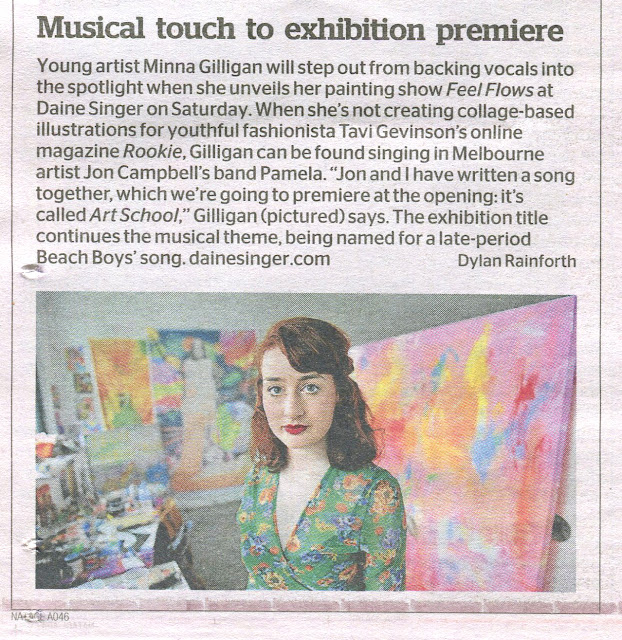 They used that same picture that they used for the article on Rookie mag and me back in November ish. I feel like I have changed so much since then and that was only like a little more than 6 months ago! What can I say I go through phases.

Last night I had a work in the Kenneth Biennale at TCB. Kenny is an old friend of mine and asked me to be in the show and I happily obliged. He was giving away free Bertie Beatle showbags! Here is a picture of Daine and I with one. (I stole two and snacked on them at work today) 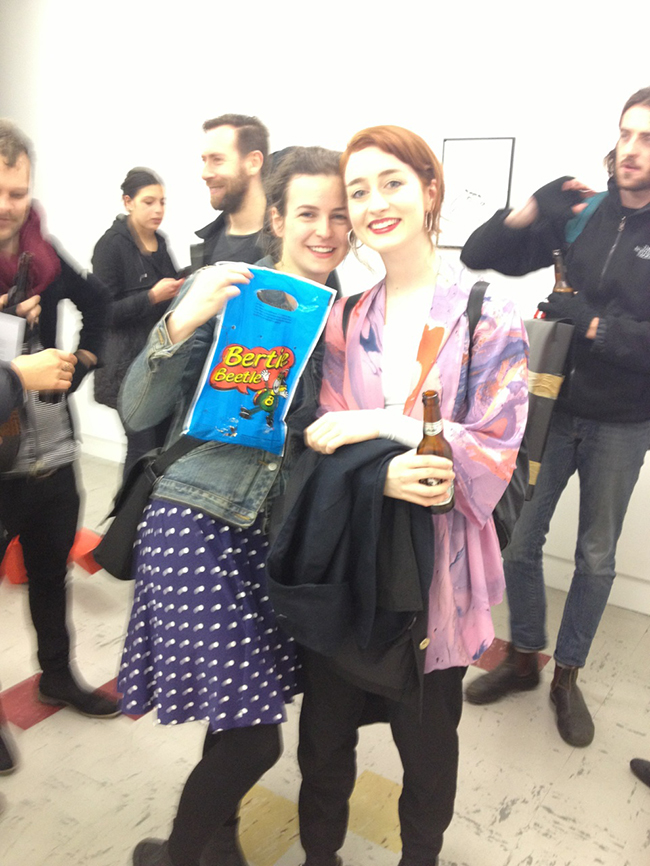 Now back to business. This is a special post because I am going to publish here one of the two essays that were written about my show 'Feel Flows'. I mentioned before that two beautiful writers based in the US, Kate Durbin and Alicia Eler would both be writing these essays. I received them both over email last week, and was absolutely stoked with them. These girls are brilliant. Today I am pleased to post the essay by Alicia Eler, titled 'There Are Mirrors In Paradise'.

There Are Mirrors in Paradise

Minna Gilligan's paintings infuse the hall of mirrors located in our minds with moments supremely romantic and dreamy, steamy and tropical like The Beach Boys' classic song "Good Vibrations." It’s not that the Melbourne-based artist just channels the hippie movement of the 1960s and its break into the polyester-everything 1970s; rather, she unabashedly utilizes a color palette that evokes a world located outside of your everyday visions, dipping into your Internet-modified notions of reality. It is through cyberspace that her work first entered our mindscapes.

I've never seen Ms. Gilligan's work in person, but her work is emblematic of the inherent connectivity of the Internet and the communication barriers that it erases. Her paintings and illustrations, which I have only seen online, speak to the sort of connectedness that, like the origins of the imagery she sources, was only achievable through psychedelic drugs made famous by counterculture bands, starting with those that performed at Woodstock. Nowadays we have the Internet, which allows for a global mindmeld through social media sites, where we can experience others’ thoughts, feelings, and the intimacies of their everyday in a mediated, second-hand space. No longer do we have to board the Magical Mystery Tour bus; we just hop on the Internet, and ride it till we get to the infinite “There.”

Then today—or was it yesterday?—I woke up and found myself lost in one of Minna’s paintings—a work I see as a sort of psychedelic geology, tracing vibrations that spin out from the Earth’s center and become larger and wider, manifesting themselves like rings on a hundred-year-old tree trunk. She layers these pulsing frequencies on top of erratic pinks and creamy oranges, interrupted by scribbles in red. Like her web presence, Gilligan's paintings spontaneously invite the viewer in. Head falls first, feet follow. In another work, yellow tones cover a sun-bleached canvas of tropical leaves, interrupted only by a small black-and-white photo from the 1950s or ‘60s picturing kids hula-hooping.

Her work uses a pastiche of imagery collected from what she calls “old” books from the ‘60s and ‘70s, the decades she so loves. Her paintings pulse like brains in the music video for “Lucy in the Sky with Diamonds.” Minna is the girl with kaleidoscope eyes, her feet tip-tapping on a milky cloud as John Lennon strums by, unassuming. Would this constitute strange imagery, or just some type of postmodern trip down acid-induced Penny Lanes where hidden speakers echo back nonsensical words? It doesn’t matter because soon her head is in the clouds, and my head is in the clouds, and your head is in the clouds, and we’re gone.

Gilligan’s paintings stand on their own as Internet objects, but they would be just as comfortable lining the background of a teen-girl's Tumblr page, or on the walls of a bricks-and-mortar art gallery—where they are currently hanging.The surreal dream is the Internet, and Minna Gilligan—the Internet presence, and the real woman who lives in Melbourne, Australia, who I may never meet IRL—is the curator.

Reading this bought a very real tear to my eye! To see more of Alicia's wonderful work, head to her website http://www.aliciaeler.com. I plan on posting Kate Durbin's essay here after the opening on Saturday!

I get really emotional at the fact that people so far away, on the other side of the world, can access my work and the contents within. This restores so much faith for me in the power of art and magical stuff like it. I've said this before, but I want my art to be more like music in a sense that it knows no boundaries and can be be broadcast over radio waves across seas. I love the internet because in a way it allows me to do this with my art, and that power is very important to me.