The time has come

...the walrus said, to talk of many things: of shoes and ships and sealing wax, of cabbages and Kings, and why the sea is boiling hot, and whether pigs have wings...
Because I always stare off into the distance and say: "the time has come" the other day my friend asked me if I could recite that whole Lewis Carol prose and I tell you I got pretty close! The time has indeed come, as of Monday I will officially be starting the third and final year of my Fine Arts degree. How it happened I do not know but my friends from Uni and I are now the mature and painfully hip 3rd year students we once cowered from - and oh what a feeling!
I have a FANTASTIC studio space, and last night I simply couldn't stop thinking about it and all the things I'm going to make inside it! And today, seeing as though it is my last free day of holidays (I'm working tomorrow) I decided to make the most of it and do something unusual, so I went to Savers and bought a bunch of old books that I am going to use for art stuff the SECOND I get in that wonderful studio of mine! Art oh art how sweet it is. As is routine, I love lunchtime routines and train time routines and organization and other glorious things of that nature. 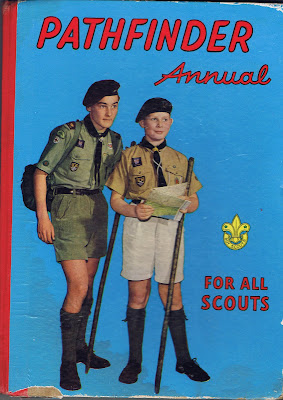 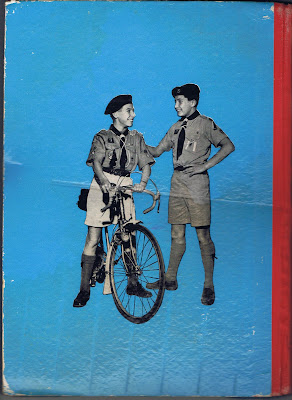 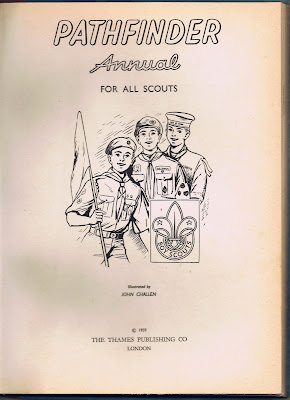 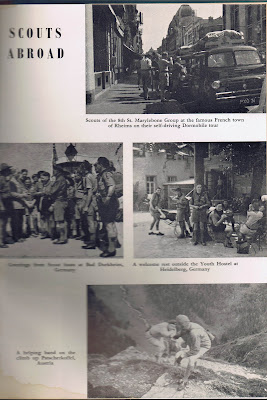 These images are scans of one of the books I bought today. Fittingly it is called 'Pathfinder', something which would be helpful for me to find the path I'm meant to take for the rest of my life (post third year) but somehow I still feel like a 'Scout abroad'.
No comments: 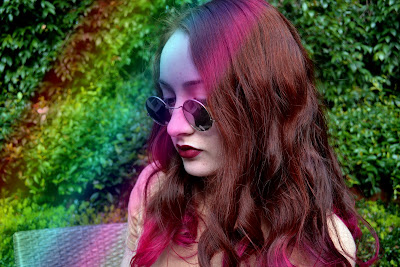 I have been listening to Roy Orbison for the past hour and I've got myself into a weird state. He sings a lot about crying and 'his baby' and it being over and his heart breaking in two. Y'know some pretty intense stuff.
My Aunty told me this story the other day that when her Dad died - she was quite young at the time - she threw into his grave a charm from her charm bracelet he had given her, of a little pot of gold. I got to thinking about the 'pot of gold' as a symbol. It's quite beautiful and is a visual for happiness and wealth, both physical and emotional. I like it a lot, even more when it's at the end of the rainbow.
I want to make some kind of art about the pot of gold, or even I want my art to be like the pot of gold or I want a pot of gold in my life. The thing about the pot of gold though is that it's not really found at the end of the rainbow, I think it's found in other forms when you least expect it. Sometimes we already have a pot of gold and we don't even know it!
No comments: 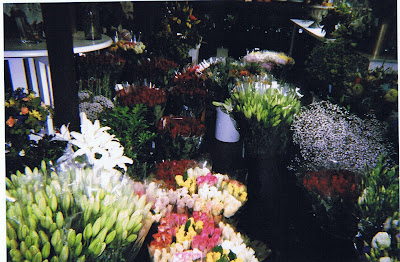 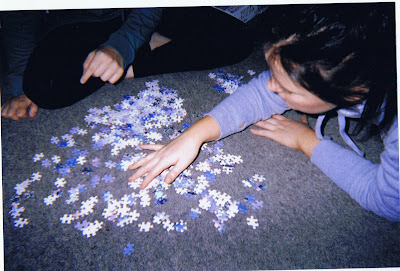 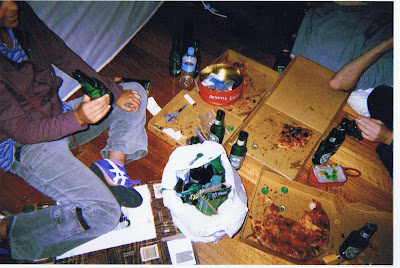 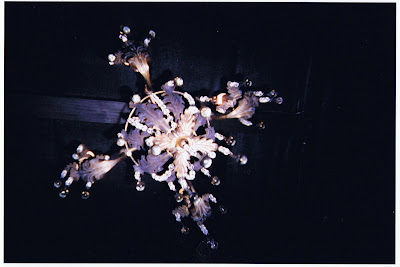 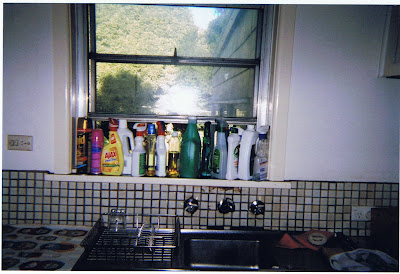 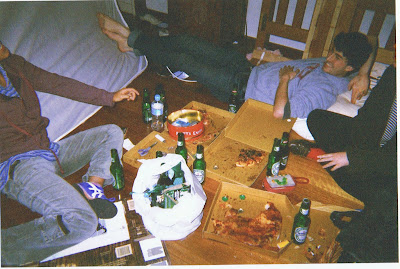 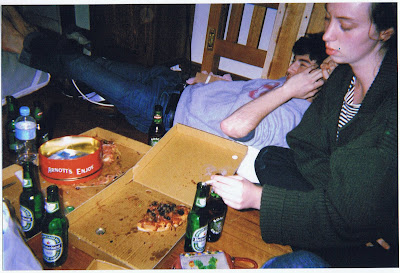 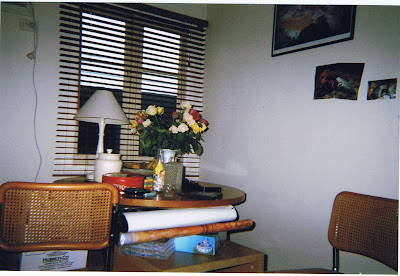 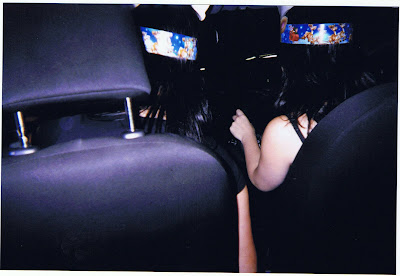 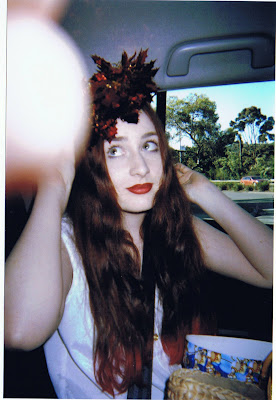 I love my Nanna. I spend a lot of time with her and know all her little quirks and habits. I love her even more for her little eccentricities. She does this thing where she uses the word 'variety' in the wrong context, for example - she would buy this particular brand of biscuits and be telling me about them and describe them as being a 'nice variety' I mean what does that even mean? Or, I would have a pile of mess in the corner of my room and she would say something like "Do you plan on keeping that variety there Minna?". It doesn't really make sense to me but she always says it and I love it and lately I have kind of adopted it. Above is a REAL variety of photographs, I can't believe how long my hair used to be! Can you see the smiley face we made out of the pizza? That can be like a Where's Wally for you my dear reader.
I had all this stuff in my head and this post was going to be me complaining about that I paid for a one hour service to get these photos developed and it took the guy almost two hours and about how incompetent the staff at Officeworks are but I just don't have the energy. It's true what those natural healers or whoever say, it really does take a lot more energy to be angry than it does to just kind of let it go and be content. Breathe out!
No comments: 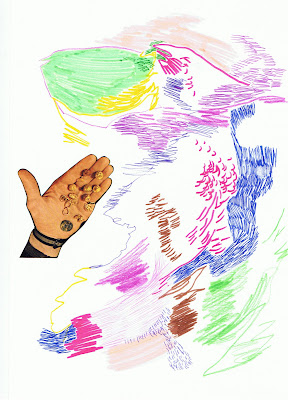 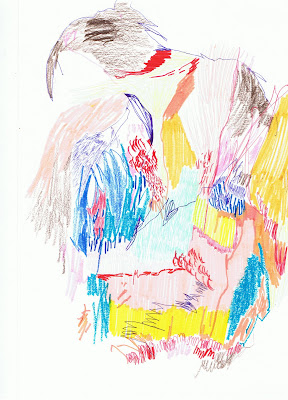 Oh art, oh art how sweet it is! University is going back in about a week so I'm making the most of the last few days just hanging around home drawing and writing and listening to music and right now in fact I happen to be watching an old favourite film of mine, Woody Allen's Manhattan and painting my toenails and curling my hair like it's 1963 except that Manhattan was made in 1979 so I wouldn't have been able to be watching it in 1963.
Today I also did a clean out of some of the floral things in my wardrobe and they're all for sale on Ebay, you can view them here: http://shop.ebay.com.au/minna2/m.html?_nkw=&_armrs=1&_from=&_ipg=&_trksid=p3686
The second drawing I posted above, kind of looks like a vulture. I'm not sure if I like it when my scribble drawings accidently look like things, and I often wonder if whatever shapes they do make mean anything, you know like things trying to escape from my subconscious. Oh golly. I wonder why I choose the colours I choose and why I make the shapes I make. How incredibly self indulgent. Maybe, it's all aesthetic, and maybe it doesn't even matter! These are the things I will be forced to consider when I go back to Uni. Uni Uni Uni. Who am I kidding, I love it.
No comments: 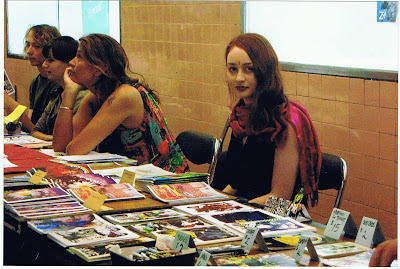 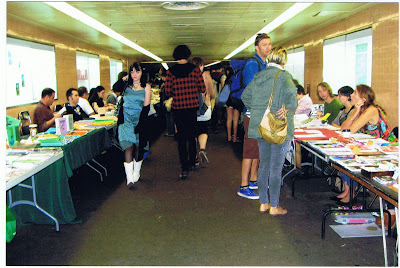 I am a bit behind on blogging because my shoes gave me awful blisters and I was so angry that I cut the straps off. But that's a lie. It really happened but it didn't stop me blogging. Anyway I must speak of the Zine fair that happened on Saturday.
I had such a fantastic time and met some really nice cool smart Zine makers who I liked a lot. I sold not lots, but a good few Zines, and got some amazing feedback from people I really respect, so that was really encouraging. I am already starting on Issue #5 and I figure there's no stopping me now!
It is very beneficial to be around other like-minded people, people who make Zines or art or music or writing or whatever. People who "get it". It reassures you that what you are doing is right and to be around other people making things is inspirational to no end. After the Fair on Saturday night I was busting to make and create a thousand things but ended up eating KFC in the KFC carpark. Interestingly it was one of the most insane things I have ever done.
No comments: 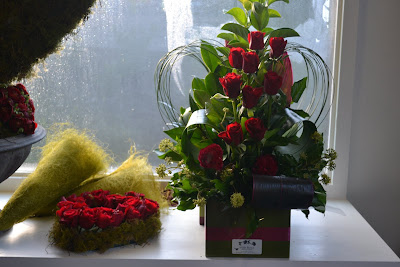 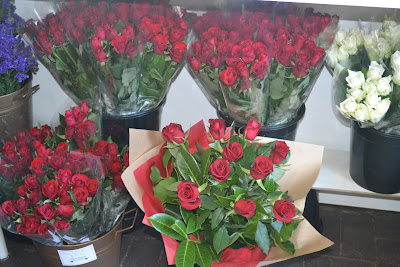 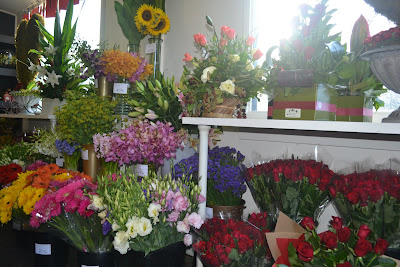 The title of this post is a pun, that's meant to be like D-Day which is a military term where "combat attack or operation is to be initiated" (Source: Wikipedia..) Except that it's V-Day, meaning Valentine's Day, which is tomorrow.
Anyway Valentine's Day is pretty dumb and stuff and "SO American" or "Depressing" or "Commercial" blah, blah blah. Yes, I get it. You are very impressive for picking up on that. But I have to think about it because now that I have a job at my Mum's florist, it is the biggest day of the year. THE BIGGEST I tell you. It's going to be really big. We have so many flowers and it's pretty lovely because flowers are beautiful, but as you all know some kind of ridiculous rambling paragraph(s) will be to follow.
Some people I know (think that I'm crazy) but also - scoff at the idea of showing affection or something. I think giving flowers is a wonderful gesture. They are beautiful and ephemeral and if you ignore the hideous soft toys and foil balloons you've got something so simple that is one of the closest things to representing human emotion in physical form. To give flowers is regarded as a kind of 'Simple Simon' or base gesture but seriously I am so into it. This is not a fabrication by any means either, but my first word was 'flower', you can ask my Mum. Flowers are brilliant. I do not have a 'Valentine', but if I did, I would be giving him flowers. Fucking flowers.
Things I like about Valentines Day:
1. Flowers
Things I don't like about Valentine's Day:
1. Bears holding hearts
Thank you and goodnight.
No comments: 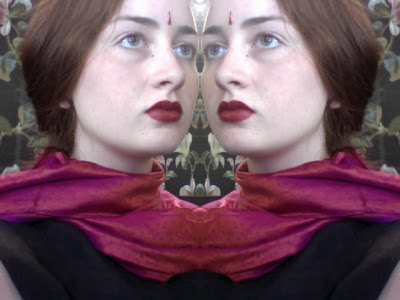 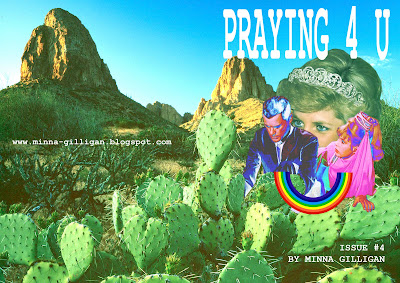 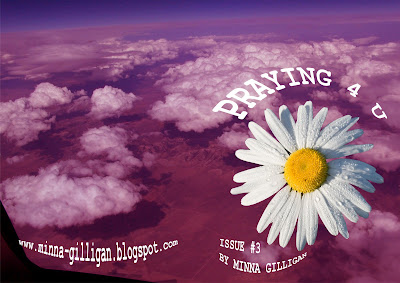 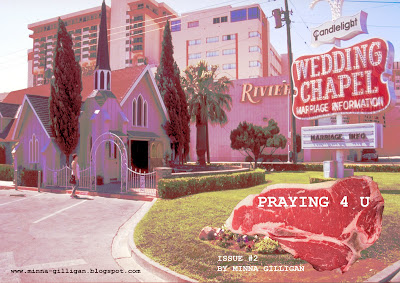 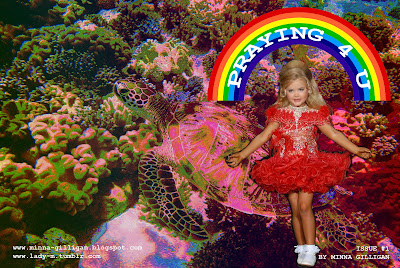 I was asked to be a part of Sticky Institute's ZINE FAIR this Saturday the 12th of February, which is so exciting! It begins at 1.00pm in the Degraves Street underground, just outside Sticky! It is my first Zine fair and I won't know anybody and will not fit in with all the cool people with lots of Zine fans or whatever so if you are in the city, you should come and visit! I have TWO new issues of 'Praying 4 u' for sale, as well as all the back issues. Issue #4, hot off the press, even comes with a free 'Mix CD', made by yours truly! Zines will range from $3.00 to $5.00 and all proceeds will go towards me making more Zines... a worthy cause.
If you can't make it on Saturday but still want to purchase copies of my Zine, issue #1, #2, #3, or #4, email me at minnagilligan@hotmail.com for price list and postage costs. After the Zine fair I will drop in any copies I have left to Sticky, so there may be some there, too. Anywayif you can make it, it would be great to meet some blog readers in 'real life', albeit potentially awkward and definitely a situation where I am likely to say strange things that don't actually make sense or put together words like cool and good and say 'gool', however life shall go on! Hope to see you.
Love, Minna
No comments:

The Accumulation of Shit

There's something about being an artist and collecting things. My friend Georgie said yesterday that her problem is that she can see value in everything. I know what she means. It is similar for many artists, putting things away, accumulating objects from all walks of their life because they are inspiring or sentimental or beautiful or ugly or they just are. Personally, I have a lot of stuff, a lot of stuff people would consider junk. At times I do wonder if I am a hoarder, or, if not already, will be one in the future. The Manor, my friend's share house, is interesting because with four artists living there, a large amount of 'things' have complied over the year. Not your regular things really, either. Yesterday while I was helping to clean and pack we came across a plethora of weird and wonderful items, hoarded by different members of the household.
We are the kind of people who would say, in 3 or 50 years time - "Where is that thing I had, I want to use it for this thing I'm making" That's why we don't throw anything out. EVERYTHING has the potential, ONE DAY, to come in handy, which is quite scary really... 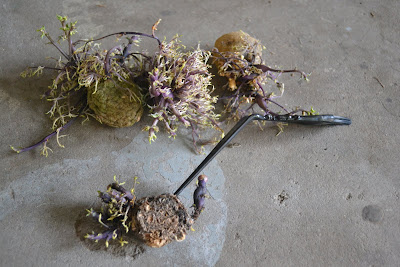 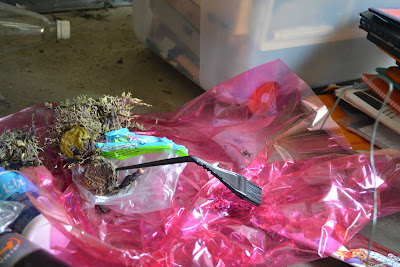 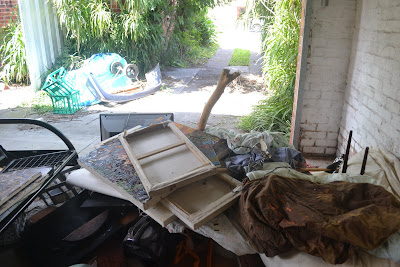