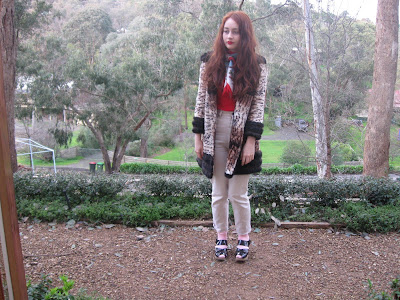 This is what I wore today. "Who cares?" I hear you asking. I am not entirely sure but it was the only creative thing I achieved. Writing here could also be included as something creative so here goes.
A weird thing happened today, I got three text messages at the same time from different people in different places. I can never really imagine people thinking about me, let alone three people coincidently thinking about me at the same time. It was a refreshing thing to think about.
Thinking thinking thinking. I would love to know what people think about me. Wouldn't everyone, I know, but really like everyone I know has their own classification in my head. I would like to know what my classification is for other people. But it's almost impossible to explain.
My friend asked a cool question the other day which actually very tellingly revealed what people think about people. "What flavor ice-cream am I?" It really works. Just only ask people you like. My friend said I was cinnamon which was nice.